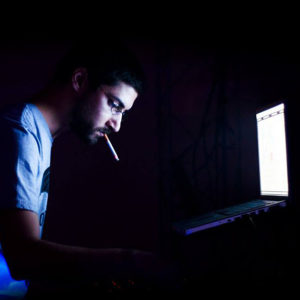 “Tommers born and grown in the foggy north-east of Italy. He fell in love with music production at the age of 15, when he bought his first sampler: there began his musical adventure that guided him throughout his life. Experimenting with different genres made him embrace the totality of sound as his own work and life motive, in fact, he actually works as a freelance audio technician in live concerts through all Italy and as a master engineer in his home studio.

His music style is characterized by deep dreamlike and melancholic atmospheres supported by solid kicks between acid and mentalcore. Its acidity acts as a glimpse of light in the darkness, to literally hypnotize the listener. A distinct but constantly growing style led him to publish over 20 releases in all Europe.

The point of all his music research and composition is to create timeless music, capable of surviving through genres, fashions and commercial compromises.”