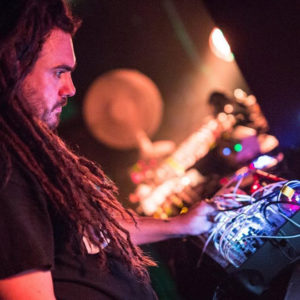 Kaoslog is an Italian-born musician seeking exile in Berlin. He studied and composed music since the age of 15 when he started play guitar in a grunge rock band. At the age of 20 went quite musically inactive due to University studies and went back on his musical roots only in 2011 when he moved to Berlin, producing the first tekno and DNB tunes . In early 2014 something unexpected happened… he stumbled on a old live recording from Vikkei and Tommers and he got furiously infected by the acid virus. In that moment he decided he had to dedicate his life learning music production and experiment with hardware as far as he could.

Kaoslog is a visionary. He sees music as his own extension, his way to describe reality how it is: gritty, raw, passionate, without compromises, a dichotomy of opposites.

The Berlin influence can be easily heard on his Techno Industrial project, about:kaos. Hard and repetitive as the modern society is, still mentally challenging and unforgiven. His plan for the future is to keep his journey to perfection thru the music world.